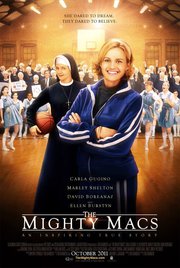 The Mighty Macs!  In theaters October 21, 2011, this movie is a family friendly piece of entertainment that our cinemas are craving.  I had the awesome privilege of watching a pre-screening of this film with my family and we loved it.  It was good from beginning to end!  The acting was great, the game scenes were exciting and the storyline was intriguing.

Here's the official "what's it about" run down for you...


It's 1971. Cathy Rush is a woman ahead of her time ... and she's about to embark on an adventure for the ages. A new era is dawning in the country and in collegiate athletics, where a national champion will be crowned for the first time in women's basketball.
In the lead up to this historical season, major universities are preparing their game plans to win that first title. Meanwhile a tiny all-women's Catholic college in Philadelphia has a more modest goal: find a coach before the season begins. Providentially, Cathy Rush is about to find Immaculata College.
Recently married, Cathy is dealing with the aftermath of a truncated playing career. While cultural norms would have her staying at home, she's willing to do the hard work necessary to help her new team reach their goals—or perhaps she's just trying to achieve her unfulfilled dreams through them.
From the beginning, her challenges are as imposing as the big-school teams Immaculata will face on the court. Cathy learns there is no gymnasium on campus, she receives little support from the school's Mother Superior, and the school is in dire financial straits. To top it off, she may not even have enough players to field a team!
While it appears the Macs don't have a prayer, all hope is not lost. With the help of Sister Sunday—a spunky assistant coach—and the support of a booster club of elderly nuns, Coach Rush creates a new game plan that just might bring the team—and the school—together.
Will this pioneer buck cultural norms and spur her rag-tag team to unexpected heights? Or will her hard-driving ways create a wedge between the coach and everyone around her? One thing's for certain: there's never been anyone like Cathy Rush at Immaculata!
How about you watch this trailer and get all excited on your own....

Get more of the scoop, including pictures, trailers, info on the real Mighty Macs, tickets, etc at The Mighty Macs website or visit their Facebook page to see what other viewers are saying.  Don't miss this movie.  Good stuff like this doesn't come too often!

"Disclosure of Material Connection: I received one or more of the products or services mentioned above for free in the hope that I would mention it on my blog. Regardless, I  only recommend products or services I use personally and believe will be good for my readers. I am disclosing this in accordance with the Federal Trade Commission's 16 CFR, Part 255: "Guides Concerning the Use of Endorsements and Testimonials in Advertising."
Posted by Doreen at 6:43 PM

Email ThisBlogThis!Share to TwitterShare to FacebookShare to Pinterest
Labels: Other Reviews