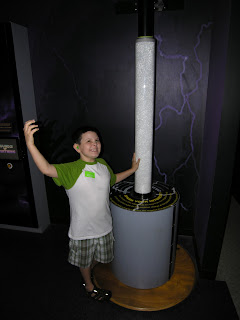 Homeschooling a child with unique needs is like putting together a jigsaw puzzle while the pieces keep changing. For a child with Tourette Syndrome, each day can be a different puzzle all together. Tourette Syndrome is a neurological movement disorder characterized by involuntary motor and vocal tics. What I’m about to share with you are a few unique techniques to teaching your energetic child or kinesthetic learner. Please, hold your “aha’s” until the end.

Let me introduce you to my son, Matthew. He has Tourette Syndrome (TS) and Obsessive Compulsive tendencies. He is also hearing impaired. Matthew is twelve years old and this is our fifth year homeschooling. Here is a scenario of what a day was like for Matthew when he was in school:

“Matthew, don’t get out of your seat without permission.”

Cough, scrunch face, lick lips, tap foot, spin pencil on desk, write answer to question six, bark like a dog, scrunch up scrap paper, get up to throw away paper.

“Matthew, don’t get out of your seat without permission. If you do it again you’ll get detention.”

Spin around twice, sit down, cough, scrunch face, lick lips, tap foot, spin pencil on desk, write answer to question seven, bark like a dog, get up to sharpen pencil.

“That’s it Matthew. You have detention. Go to the Principal’s office.” 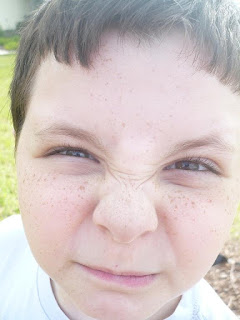 What happened? Matthew was ticking so badly that he couldn’t even work at a steady pace. His OCD was the final culprit that got him a ticket to detention. His compulsive need to have a perfectly sharpened pencil and his aversion to having any garbage (the crumpled paper) near him was too strong to resist. My suggestion to the teacher to allow him to use a mechanical pencil and keep a trash can next to his desk was not welcome. So, homeschool, here we come.

When we started home school it was apparent that the creative juices needed to be turned to high flow! When Matthew was younger I could barely keep up with his changing tics. My son was not capable of sitting still in a chair for more than a few minutes. Even though we did a lot of hands-on learning, there were some parts of the day where he needed to be able to sit at the table. Aha! That therapeutic ball in the corner collecting dust was about to get a real workout. It was our new best friend.

Matthew would sit on that ball while working at the table and instantly his concentration improved. Sure, he was lightly bouncing, rotating in small circles and shifting his hips forwards and backwards, but, the energy from his tics was being focused directly into that therapeutic ball which allowed his hands to be free to do his seat work. The ball provided the vestibular stimulation his body craved and allowed him to dispel his tics without interrupting his work. And, of course, there was a pencil sharpener and trash can right next to him. Take that, Kindergarten Teacher!

The therapeutic ball worked wonders, but its magical powers wouldn’t last forever. We had other subjects to conquer that didn’t require sitting at the table. So, picture this…Matthew is spinning in circles, doing headstands on the couch, running across the room, and jerking his head so sharply that I think it might just snap off. I can’t even track him in the room, never mind when he darts down the hall. Hmmm, how to contain him without the use of duct tape? Think, brain, think.  It looks like my mini trampoline is going to become our *next* new best friend.

Matthew jumped on the trampoline while spelling his words, reciting his vocabulary definitions, and drilling his math fact tables. The kinesthetic activity was the perfect complement to his energetic tics. It was small enough to fit in the middle of the living room when in use and then slide behind the rocking chair to store it. It sure tuckered him out after about an hour, too! Amen, it’s time to take a nap.

We were on a roll! I felt like we had tackled two of our biggest obstacles; being able to sit for longer than a minute and avoiding pinball syndrome around the house. Yay, team! Hurdles related to Matthew’s uniqueness started to feel more like mini speed bumps. On days when Matthew’s tics were so bad they prevented him from writing, we would play our “baseball game” instead. We set up the living room like a baseball diamond. I would toss him a ball from the “pitcher’s mound” while asking him a question. If he answered correctly, he could move to the next “base”.  He loved to slide into home plate, especially because it earned him bonus credits.

I hope these few tips will help you to realize that schooling your “kidlet o’ energy” can be fun and rewarding. Matthew has grown so much in his own ability to control his tics since those first years and does not need some of these special accommodations any more. You’ll still find us sneaking in a game of “baseball” or taking a hop on the ball though. After all, it’s fun! I believe that Matthew is the confident learner that he is today because of the unique approach we took to his lessons when he needed it the most. Above all, I believe we have equipped Matthew to think outside the box, so when he is faced with the ever changing aspects of his special needs he won’t back down. He may not face them head on though. He may sneak around the back and pounce on it from his trampoline.

What new and exciting activity or tool will you bring into your home school this week? Make learning come alive for your child! Have fun and create learning memories that will impact him for a lifetime. I hope you’ll share your ideas and experiences here with me. I’m looking forward to learning from you!

Check out my original posting of this article and lots of other interesting articles by talented writers at the Home Educating Family Blog.
Posted by Doreen at 11:06 PM 1 comment: