Don't just stare. Ask me about my Tourette.

"Don't just stare.  Ask me about my Tourette."
That was what my son was screaming as loud as his heart could be heard, but without saying a word.
Matthew has been going to Karate Camp all this week.  Before I start to share about what prompted this post I have to say that he is having a great time!  It is fun and he is learning a lot.  Each day I have picked him up I ask if he wants to go back and he responds with a definite "Yes!".
But, for a kid with Tourette trying something new and adventurous like this doesn't come without obstacles to overcome and lots of bravery to muster up.  First of all, the change in routine is enough to jump start a bag of new tics and OCD behaviors.  But, Matthew doesn't shy away from the challenge.  His motto...."I have Tourette's, but Tourette's doesn't have me."
So, onward we go.....
Camp started Monday.  Great day.  No new tics.  Tuesday morning comes and as we are getting ready to go back to camp I notice his vocal tics are a lot louder and more rapid than "normal".  I ignore it (like I always do because that's what is best).  Matthew is doing more pattern and OCD behaviors than "normal" for his morning routine.  Hmmmm....what's up?
I send Matthew off to get dressed and when he comes out *finally* I look quickly and notice the shirt he has on is too small for him.  I ask him to go change.  He just stands there.  Then, I look closer and realize that it is his t-shirt from the Florida Tourette Syndrome Family Weekend we went to earlier this year.  I look into his big brown eyes that are watery with tears and I say "You really want to wear that shirt?".  He nods his head as a tear rolls down his cheek.  I swallow the large lump that has formed in my throat and I say, "Do you want people to ask you about your Tourette?".  He nods again and his bottom lip trembles.  I hug him and tell him how brave he is and how wonderfully God has made him.  He says to me....
"If they know about my Tourette's, then maybe they won't stare."
Now, I don't know who was staring.  It might have only been one person and only one time!  Noone at camp has been mean to him.  Remember, he is having fun!  But, for Matthew it is just one more time that he feels misunderstood.  Matthew doesn't mind being different, silly, weird, odd, coo-coo.... 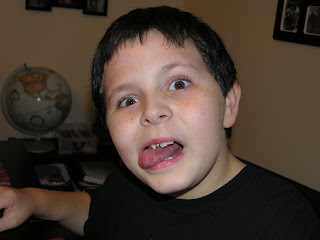 I try to teach him that people are curious creatures and that sometimes people will stare at things they don't understand, that they are curious about, or that interest them.  Lucky Matthew!  He is the subject of curiosity!
So, off to camp he goes....in the 2 sizes too small shirt...
Can you imagine how much I prayed for him during the day?  Lord, give him strength.  Help him to be brave.  Show him that he is fearfully and wonderfully made.  Let him know that you have given him a gift; one that can open the hearts and minds of others.  Give him the opportunity to share about how amazingly unique he is and how he can do all things through Christ who strengthens him.  Oh, Lord, hear my prayer!
I picked him up from camp and everything looked great!  Smiles, laughing, detailed run-down of the day's events. *Sigh*  So, I have to ask...."How did the shirt work out today?"
"It was a good day today and I think it's going to be a good one tomorrow too."
Now, what that means in detail, I don't know.  Did he get to talk to someone about his Tourette?  Did the shirt speak for itself?  I didn't press for the answers.  All I knew was that my brave son had conquered an obstacle, he moved forward with his heart on his sleeve (literally), and he was reminded once again that nothing can stop him from having joy in his life.  That's all I need to know.
Tourette doesn't define Matthew.  If you ask him to tell you about himself, he may not even mention it, or it may be mentioned after the long list of other things he likes about himself like that he loves legos, he's an awesome reader, he is a purple belt in karate, he plays the guitar and he loves doing science experiments.  But, the Tourette is always there - ticking away.  The OCD is always there.  The hearing aid is always there.  You can try to ignore it, but it doesn't go away.  Matthew tries to push his tics inside when he is around people he doesn't know very well because he doesn't like that it makes him feel weird.  It takes a tremendous amount of energy and sometimes makes his tics worse.  So, in the words of Matthew....
"Don't just stare.  Ask me about my Tourette."
Posted by Doreen at 7:23 PM 13 comments:

Amen!  A family movie that delivers a powerful message.  The Grace Card which is set to release on DVD August 16 is a movie with a purpose - to remind us all about the power of Grace.  I had the awesome privilege of receiving this DVD to watch before its release date in exchange for an honest review.  Tonight, my family watched it together.  My 11 year old son was so into it that when it was over he rewound it to watch certain scenes again.  My husband and I both agreed that it was a refreshing movie.  We both had tears in our eyes at a few points.  The characters were believable and the message was clear - we all need Grace in our lives and it starts with forgiveness.  I am looking forward to sharing this DVD with my friends - believers and non-believers.  Everyone needs to see this movie.  It's a perfect additional to a family or church's DVD collection, or to share with a youth group or a women or men's group.  This movie will move you to want to know Grace and Forgiveness at a more personal level.


Everything can change in an instant ...and take a lifetime to unravel. When Mac McDonald loses his son in an accident, the ensuing 17 years of bitterness and pain erodes his love for his family and leaves him angry with God ...and just about everyone else. Mac’s rage stonewalls his career in the police department and makes for a combustible situation when he’s partnered with Sam Wright, a rising star on the force—who happens to be a part-time pastor and a loving family man.

Can they somehow join forces to help one another when it’s impossible for either of them to look past their differences—especially the most obvious one? Every day, we have the opportunity to rebuild relationships and heal deep wounds by extending and receiving God’s grace. Offer THE GRACE CARD … and never underestimate the power of God’s love.
Visit The Grace Card website HERE to learn more about this movie. The Grace Card will arrive in stores on August 16, but you can pre-order online by clicking HERE.  There are four online resources to choose from and make sure you check each of them because they are each offering them at different prices.  If you want to get in on the excitement via Facebook, just click HERE and like their page and start chatting.

This giveaway has ended.  Congratulations Debra from Note-able Scraps!


The winner of this giveaway will receive one copy of The Grace Card DVD!  Be sure to leave ONE comment for EACH entry and include a way for me to contact you.  All entries must be received by midnight EST on Wednesday, August 24, 2011.  The winner will be contacted via e-mail and have 48 hours to respond.  If I don't hear back from you then I'll pick another winner, so mark your calendar and keep an eye out!  Here is how to enter....

“Disclosure of Material Connection: I received one or more of the products or services
mentioned above for free in the hope that I would mention it on my blog. Regardless, I
only recommend products or services I use personally and believe will be good for my readers.
I am disclosing this in accordance with the Federal Trade Commission’s 16 CFR, Part 255:
“Guides Concerning the Use of Endorsements and Testimonials in Advertising.”
Posted by Doreen at 9:34 PM 21 comments: