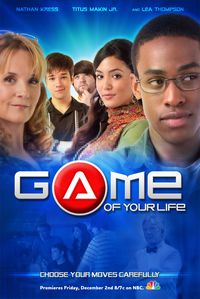 
When industrious high school gamer Zach Taylor lands a prized scholarship to the prestigious Digital Institute of Game Design (DIGD), his future breaks wide open. The opportunity to study under gaming legend Marcus Bentton and alongside the country’s most creative minds will certainly propel him into a successful career as a video game designer. That is, if he can pass the infamous freshman project that eliminates more than half of the class within the first three months.
Paired with brilliant yet socially awkward teammates Phillip and Donald, the trio persuades Sara Ramirez – a determined and striking team leader with whom Zach has a history (and possibly a future) – to join their team. Working off-campus in the teched-out Lincoln Alley loft, the four set out to involve the entire campus in a quirky new social interactive game. But as the group becomes entrenched in the project, Zach learns that his father Billy, a widower, is facing growing financial woes at home. To help out, Zach accepts an opportunity to work directly with Marcus Bentton on a secretive side project that seems too good to be true. The effort requires nearly all of Zach’s time and energy, which he should be devoting to the project. Struggling to keep it together, Zach is torn between his responsibility to his team, his admiration for Bentton and a chance to help his father.
Everything comes to a breaking point when Zach’s team threatens to remove him from the group and the deceptive truth behind Bentton’s project comes to light. With the guidance of Professor Abbie Lambert, Zach must make a decision that not only affects his future, but the lives and livelihoods of the people around him as well. It’s a revealing story that recognizes the magnitude behind the choices we make and the importance loyalty plays in making good decisions.

Game of Your Life - Talks with Nathan from Moms4FamilyTV.com on Vimeo.

So, my family gathered together on the couch to watch this movie last night.  My son, who is a typical 11 year video game lover was excited because of the storyline.  Hubby and I were excited to have some good family entertainment.  The movie was clean and wholesome.  We loved the obvious portrayal of family values, loyalty in friendship, evidence of forgiveness, commitment, and the overcoming of personal struggles.  Overall, the movie was as promised....a great family movie.

We were a little disappointed in the acting.  The main character, Zach, did not seem sincere or believable at times.  I was left feeling like....."hmmmm, I can tell he is trying to act.  It doesn't seem natural".  I felt the same way about the female teacher's character, Abby.  Also, the filming was a bit "C" rated at times.  I'm not sure if it was because I viewed the Director's cut or what, but sometimes I felt like I was watching the quality of a home movie, rather than a TV movie.

The movie is definitely worth your Friday night time in the living room!  Pop some popcorn and cuddle up with your loved ones.  Family Movie Night is coming, so don't miss out!  "Game of Your Life" will air on Friday, December 2, 8/7c on NBC.

See what others are saying about Game of Your Life by visiting their Facebook page or Twitter!
Posted by Doreen at 5:56 PM No comments: