Tourette Syndrome - The Making of a Documentary

It never ceases to amaze me how God answers prayer.  About a month ago I wrote a post about something Matthew was working through.  You can read it here.  After I wrote it Matthew and I started praying (even more than we already do) for God to give him more opportunities to be a voice of awareness for Tourette Syndrome (TS).  Then, only 3 weeks later, the opportunity we had been praying for fell right into his lap.

Jaylen is a boy a little younger than Matthew who, along with his mother, started a non-profit organization named Jaylen's Challenge.  He is on a mission to change the world by raising awareness about TS and putting an end to bullying.  We have been big supporters of Jaylen for the past 3 years.  About a year ago, Jaylen was part of a documentary called Tourettes Uncovered.  He was about to embark on his next documentary in a partnership with M-TIC, Tourette Syndrome Multicultural Outreach Association, Inc.  They asked Matthew to be a part of the documentary.  We were grateful to be invited!  And so, the journey began....

As we prepared for the 24 hours we would be away, I kept reminding Matthew that we needed to do our best to "go with the flow".  Now, for a boy with TS and OCD, that's no easy feat.  We prayed and agreed that we would just focus on enjoying the experience and giving it all up to God.  After all, He is the one that orchestrated this opportunity.  We wanted to be ready for whatever He would have for Matthew during this time.

Thank God for His grace, mercy, peace, and comfort.  During the entire time, not one plan went as was hoped and not one step went on schedule.  Matthew was calm and peaceful the entire time (well, except for once which I'll explain later).  The Lord was definitely leading the way.

First stop....Common Ground Park in Lakeland, FL.  This inclusive park brings together children with and without disabilities for a unique play experience. (Matthew is in the white shirt) 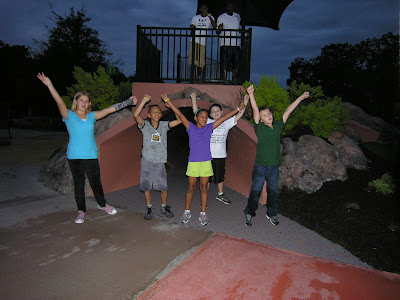 Here, we met up with another TS family and the children played.  The film crew and photographers took many candid shots.  They also did a scripted scene where the kids ran through this tunnel one by one shouting "Tourette Syndrome" and then in unison they shouted "Pushing people to greatness".  This tag line is set to be the name of the documentary.

After the park all of the families, film crew, photographers, producer, etc went to dinner at Outback Steakhouse.  Matthew was very happy for this part because he was looking forward to spending some more personal time with Jaylen.  This was the first time he had met him in person and, if you know Matthew, he was really needing to make a personal connection with him.  We all had a great time.

Then, we headed across the state to our hotel near Cape Canaveral.  We needed to meet everyone at Jetty Park at 7 AM so we needed to get some sleep.  We manage to squeak out a little....only about 5 hours!  Why were you heading to Jetty Park, you ask?  To watch the GRAIL Rocket launch, of course, and to meet Marleen Martinez, a rocket scientist with TS. 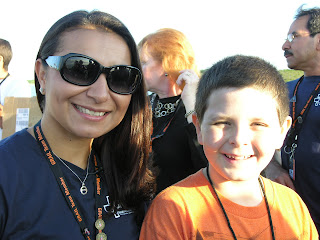 Marleen is 27 years old and is one of the featured people for the documentary.  She was wonderfully hospitable to all of the families there.  Her family was there and it was obvious that they couldn't have been more proud of her.

After all, she was a test engineer for the GRAIL Rocket!


While we were on the pier waiting for the launch that was scheduled for 8:37 AM, the crew did several interviews.  One of these involved having the children talk about the experience and ask Marleen any questions. 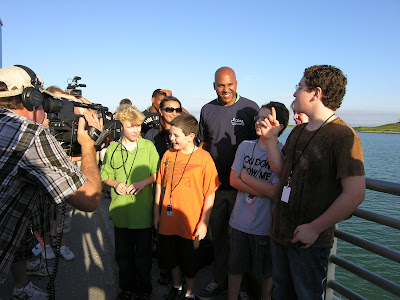 (Matthew is in the orange shirt) 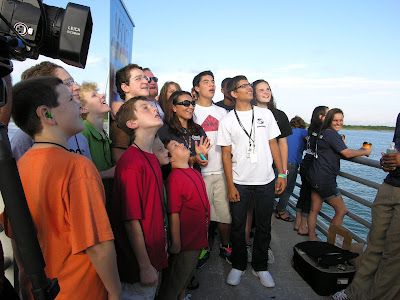 Just as 8:37 was about to come, Marleen got the word that the attempt was scrubbed.  The wind was an issue.  There was still hope for the second scheduled attempt at 9:17.  But, to play it safe, the producer decided we would "act out" the kid's reaction to the launch in order to be able to include it in the documentary.  This was quite a funny scene as the people around us were in a panic thinking they missed the launch as we all did our pretend countdown and hooted at the imaginary rocket in the sky!


When we received the word that the second attempt, and final of the day, was scrubbed because of the wind I knew what was about to come.  And it did.  Matthew finally gave in to the lack of predictive schedule and cried his little heart out.  Even though everything so far was off schedule it still eventually happened.  He couldn't understand why the launch wasn't going to happen.  Here is where his OCD kicks in.  According to Matthew,  you can't move on to one thing unless the previous thing was completed.  Marleen flew in with her magic cape and saved the day on this one.  She was so compassionate and understanding towards him.  She explained to him why the rocket could not launch and then presented us with unexpected passes to the Kennedy Space Center! 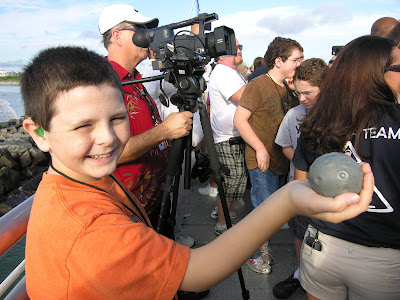 It took some time, but Matthew finally came around and was able to get back to the task at hand....the making of a documentary.  Not so fast though!  There is more waiting around to be had!  So, what else to do but goof around.  Here is Matthew holding "the moon" in the palm of his hand.

Once all of the interviews were finished, the photographer wanted pictures of all of the kids and I wanted a picture of Matthew with the President of M-TIC, Steve McCall. 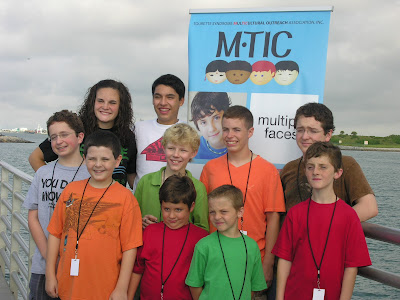 What a great group of kids!!!


Next stop....Marleen's apartment.  The crew had set up their lights and cameras there because they wanted to do individual interviews with each child with TS.  But first....more waiting.  So, what else is there to do but goof around! 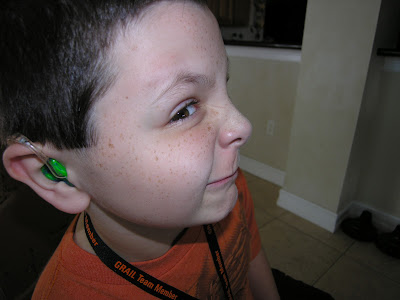 Here is a pick of Matthew being silly.  Matthew calls this "The Look".  I call it his weird "Klingon" face.  You decide. 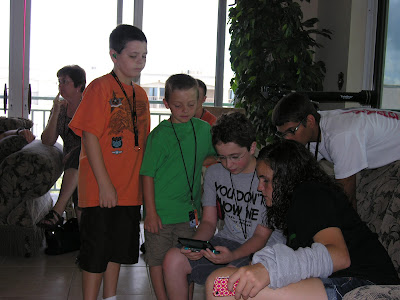 Of course, there were video games to be played too!  Here is a group of the kids waiting for their interview all hovered around one DS. 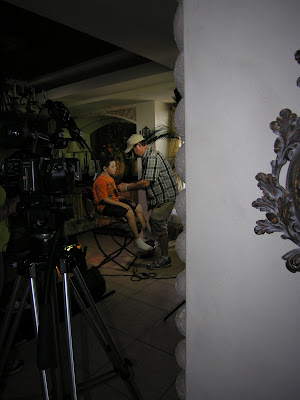 Now, it's time for Matthew's interview.  Here is a camera man hooking up his microphone.  They asked him two questions that he had to rephrase as a statement.  He said, "When I grow up I dream of becoming an engineer designer because I just LOVE to build".  No shocker there!  Matthew has been talking about being that ever since, well, ever since he could talk!  On to question number two, again rephrase it as a statement.  He said, "Tourette Syndrome is a unique gift God gave me."

For about the hundredth time within the past 24 hours I choked back tears.  We've told Matthew since he was born and we knew something was different about him that God had given him a gift that made him unique.  We told him that God would use that gift through him to touch many lives.  When Matthew spoke those words there was such conviction in his voice and I knew that, without a doubt, he believed it.  I couldn't have been more proud of him. 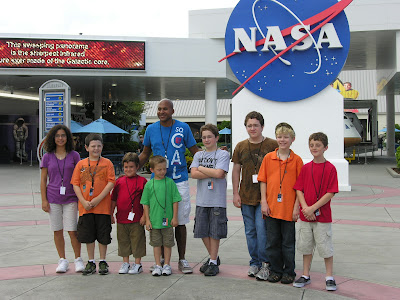 Now, for the last stop of our journey, the Kennedy Space Center.  The camera crew didn't join us for this last leg, only one of the photographers.  Here is the gang of kids together for one final photo.  Here the kids just got to be kids, playing and exploring all the wonderful things the park had to offer.

Our day was coming to an end and we said our goodbyes and thank yous.  It was such an honor and a privilege to be a part of something so important.  The documentary will take 4-6 months to edit and then it will be prepared to be "pitched" to one or more networks.  The previous documentary was picked up by the Discovery Channel, so maybe this one will follow in its foot steps.  Please be praying that it ends up wherever God can use it the most!  They will let us know about any new developments and I'll be sure to come back here and share the news.  Thanks for sharing in our excitement!
Posted by Doreen at 9:24 PM